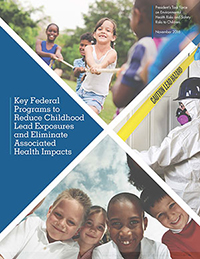 Reducing lead exposure in children, particularly in minority and low-income children who often are disparately exposed, is a priority of the President’s Task Force on Environmental Health Risks and Safety Risks to Children.

This report comprises the efforts of nine federal departments/agencies currently planned or underway to understand, prevent, and reduce various sources of lead exposure among children. Federal efforts include a wide range of activities such as research, surveillance, regulation, and enforcement, as well as community interventions and educational outreach. Most activities are integrated from the federal level to regional offices; state, local, and tribal governments; and community stakeholders so that the intended benefits can reach target populations such as pre-school and low-income children, and targeted audiences such as health educators, school officials, early care and education providers, industrial workers and renovation contractors.

In 2000, the Task Force published Eliminating Childhood Lead Poisoning: A Federal Strategy Targeting Lead Paint Hazards . The strategy put forward a set of recommendations aimed at eliminating childhood lead poisoning in the United States as a major public health problem by the year 2010. It focused primarily on expanding efforts to correct lead paint hazards (especially in low-income housing), a major source of lead exposure for children. Addressing lead exposures in the United States, however, requires consideration of sources of lead exposure in addition to lead paint including, among others, soil, food, drinking water, and consumer products.

This new report provides a starting point for the development of a comprehensive federal lead strategy that will inform policy makers about evidence gaps and steps needed to further reduce lead exposures in children in the United States. It also provides a basis for increased coordination and collaboration among multiple federal agencies that, as with previous progress on the issue of lead exposures, will be required to further protect the nation’s children.

Due to significant federal regulatory action, the United States has made tremendous progress in reducing lead exposure, resulting in lower childhood blood lead levels over time. From 1988 to 2014, the percentage of children aged 1–5 years with blood lead levels less than or equal to 5 micrograms per deciliter (≥5 μg/dL), the Centers for Disease Control and Prevention’s current reference level for lead, declined from 25.6 percent to 1.9 percent. Blood lead levels fell dramatically for all racial and ethnic groups. Despite the continued decline of children’s blood lead levels, lead exposure remains a significant health concern for children.

Today, about 3.6 million U.S. families with a child under age 6 years live in a home with conditions that can expose children to dangerous levels of lead. There are approximately 500,000 children ages 1 to 5 years with blood lead levels higher than the CDC reference level. Lead exposure is not equal among all children—national data suggest minority children, children living in families below the poverty level, and children living in older housing have significantly higher risk for elevated blood lead levels. In 2007–2014, non-Hispanic black children aged 1–5 years (4.0 percent) were twice as likely as non-Hispanic white children (1.9 percent) and more than three times as likely as Mexican-American children (1.1 percent) to have elevated blood lead levels. No safe blood lead level in children has been identified.