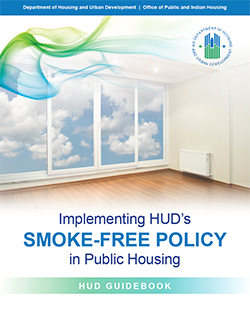 U.S. Public Housing Agencies (PHAs) house approximately 2 million residents, over a third of whom are children and adolescents, according to 2016 statistics. A rule from the U.S. Department of Housing and Urban Development (HUD), which became effective on July 30, 2018, will protect children’s health and development from the effects of secondhand tobacco smoke. Secondhand smoke causes numerous health problems in infants and children, including more frequent and severe asthma attacks, respiratory infections, ear infections, and increased risk of sudden infant death syndrome (SIDS). Smoking during pregnancy results in more than 1,000 infant deaths annually in the U.S. The HUD Smoke-Free Public Housing Regulation requires all PHAs to restrict smoking in low-income, conventional public housing buildings. The rule prohibits the use of all lit tobacco products and hookahs (water pipes) inside all public housing dwelling units, common areas, and PHA administrative offices, and in all areas within 25 feet of such buildings. HUD issued this regulation because of the detrimental effects of secondhand smoke exposure to nonsmokers, as well as the increased costs of turning over to a new tenant a unit where smoking had occurred and the risk of fires caused by residents’ smoking. Many PHAs had already enacted smoke-free housing policies before the regulation was issued, but they must now ensure that existing policies are compliant with the rule’s requirements. PHAs are free to expand the scope of their policies to include e-cigarettes, but these devices are not explicitly covered by the rule. The regulation does not require residents to quit smoking, but limits smoking to areas that are not covered by the rule. HUD has partnered with the Centers for Disease Control and Prevention’s (CDC) Office of Smoking and Health to provide technical assistance to PHAs developing smoke-free policies, as well as assistance to residents in quitting smoking.

HUD’s Office of Lead Hazard Control and Healthy Homes and Public and Indian Housing (PIH) websites provide resources for PHAs and other housing providers on best practices for implementing smoke-free housing policies. Some of HUD’s resources are also available in Spanish.